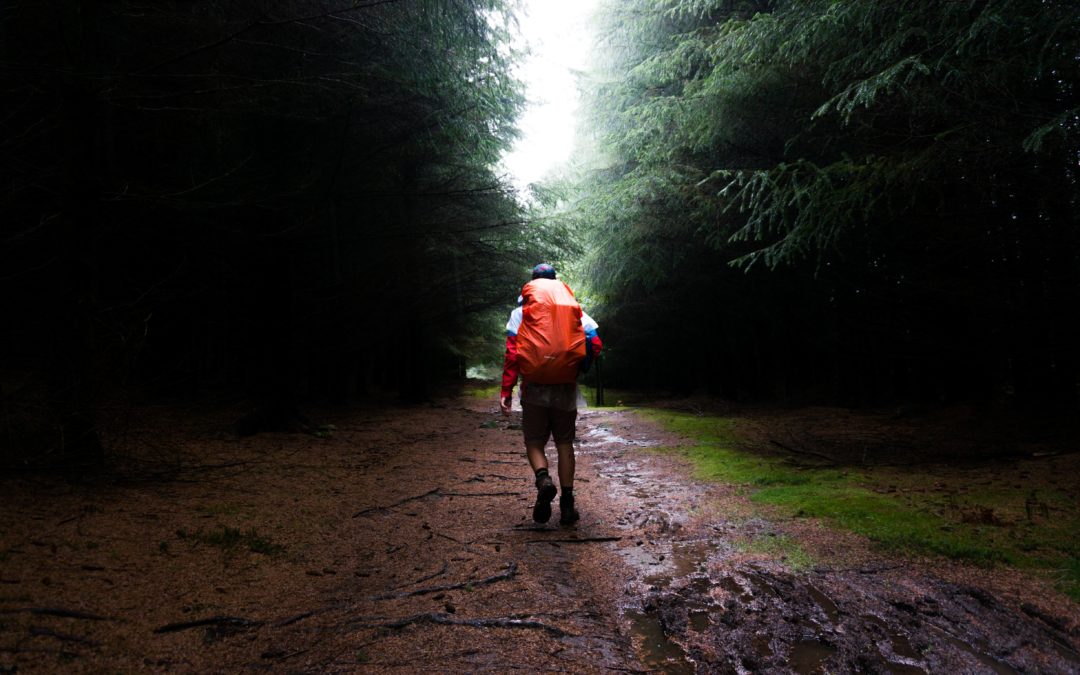 Are you planning on hiking during hunting season?

Afterall, I don’t want you being hunted by accident!

How to know you’re hiking during hunting season:
I grew up in the great outdoors and was always well aware that hunting is a common activity. I was always aware of when NOT to go play in the woods.

Not everyone is so lucky. Unfortunately, people and pets are killed every season by hunters who mistook them for a deer.

Which brings me to my first piece of advice for you:

You are the one that is responsible for knowing when hunting season occurs in your hiking area.

Don’t make assumptions. Assuming that fall is the start to hunting season can easily catch you off guard! Mid-August is not too soon for some bear hunters to be sharing the trail with you in certain states.

Your state’s Fish and Wildlife Department website provides a calendar specifying hunting season dates. Firearms and archery may be scheduled at different times, so be sure you’re aware of all hunting seasons.

To understand what you are up against if you’re hiking during hunting season, consider why hikers and hunters alike take to the woods.

Hunters go outdoors because that’s where their prey live, reproduce and congregate during migration.

Not to mention when winter is over, the prey are hungry and on the hunt throughout the woods themselves looking for food. 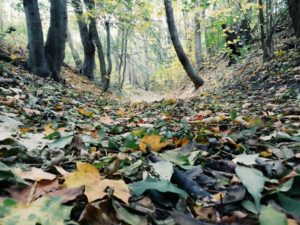 Hikers go outdoors because that’s where the backcountry and trails are. Hunters go outside to hunt.

Yes, I know that these are totally obvious statements.

But the commonalities between hunters and hikers literally puts you in the cross hairs of a weapon.

Hunters don’t typically think about hikers when they hunt.

However, they are:
watching for movement, listening for footfalls on duff, rock, trail, or scree and are ready to react quickly to a sighting of what they perceive to be a deer, bear, etc.

Think on this…
Has it ever occurred to you that you may sound just like a game animal as you walk the trail?

Or you may even look like a big animal (especially with your pack on) when you step off the trail to navigate a rock fall or to explore?

I too have had a few close calls with hunters who were stalking prey in the underbrush beside the trail, as well as a few young hunters who were far too excited to be holding a gun when I showed up on the trail.

Due to these reasons, I’m eager to share some ways to keep you safe as you hike during hunting season. 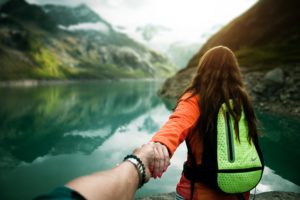 So your objective is to NOT sound or look like a game animal during hunting season.

Use these tips to navigate through the woods and trails during hunting season.

Which means you should wear orange!

The loud, bright day-glow orange vests are easy to put on yourself and your dog too.

A bright orange hat will make you visible as you go off-trail for a pee break, or even if you are taking a nap on the bank of a stream.

An orange pack cover will help you to avoid being mistaken for prey by hunters.

I urge you to add neon orange accessories to your gear checklist!

Animals don’t sing or talk (because this isn’t the movies).

Silently going down hiking trails is a magical way to hike, and in fact, it’s one of my requirements to be a trail buddy: knowing when to be silent (is golden).

But in hunting season, quiet time is over. In fact, there is no better time to tell jokes, laugh loudly at everyone else’s jokes, and be loud than during hunting season.

You can even sing your favorite song (off key is just fine) as many times as it takes to get you through the hidden or wooded sections of your hike.

Some hikers even wear bear bells in the summer to ward bears off.
You can use bear bells during hunting season to ward off hunters!

Important Tip: When you hear gunshots nearby, go ahead and immediately shout out about your presence to hunters who are probably trying to track a wounded animal.

Afterall, you don’t want to startle a hunter into making a bad decision. 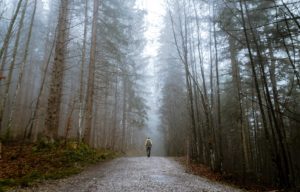 Hike when animals are inactive, as experienced hunters know animals have cycles of activity with peaks, lows, and valleys, notably being active at dawn and dusk.

So, in theory, if hikers are on the trails while animals are inactive and staying off the trails during the two times of dawn and dusk, then they and hunters don’t typically cross paths.

You need to know this if you’re hiking during hunting season!

Tips for modifying your hiking hours during hunting season:

When backpacking sleep in awhile or enjoy a second cup of coffee prior to hitting the trail each morning.

If you’re still hiking on the trail as twilight falls, know that your orange coloration won’t be as visible. So consistently make loud noises!

Always check the information for rules surrounding hunting season.
Another place to hike in is the vast backcountry of Alaska in areas where hunting is not permitted:

Be safe, wear orange, be loud, and stay informed!

One last tip:
Every year you should take the time to review the hunting rules for any changes or additions. Complacency is never your friend before heading out to hike during hunting season.